The Nellie Gail Ranch Owners Association office will be closed Thursday and Friday, November 26th and 27th in observance of Thanksgiving Day.

The Club will be open on Friday, November 27th  from 6:00 am to 9:30 pm. consistent with the California Department of Public Health Curfew in order to ensure our guests and staff are able to be out prior to 10:00 p.m.

Equestrians and hikers who know this section of the trail just beyond the Nellie Gail Road tunnel are familiar with conditions resulting from natural drainage that has been at best boggy and at worst impassable. In collaboration with the City, we have completed work this week to install culvert sections to transition water under and away from trails. This work will result in making a major link of the Nellie Gail Ranch trail system between the Equestrian Center and Moulton Parkway accessible for improved use throughout the year.

Some comments were easy to incorporate like consistently referring to them as “Guidelines” instead of “Standards”. And, seeing as how Nellie Gail Ranch has seven Committees, there was a recommendation requesting we include the full name of the “Architectural Review Committee” rather than simply referencing “Committee”. Both suggestions were implemented.

Many comments expressed concern for the adoption of guidelines allowing Accessory Dwelling Units due to concerns for increased density, more parking, and possible rental of the dwelling units. We share those concerns, however, state legislation has been imposed upon Nellie Gail Ranch Owners Association and the City of Laguna Hills requiring we allow them. In fact, the California Department of Housing and Community Development has published a handbook of guidance to “assist local governments, homeowners, architects, and the general public in encouraging the development of ADU’s.” What we can do is adopt reasonable guidelines to ensure that ADU and JADU structures harmonize with the community aesthetics and reduce the adverse impact to adjacent owners.

Due to civil code restrictions, we were unable to implement homeowner suggested guidelines related to population density, street parking, rental restrictions, and required neighbor approval. As those types of guidelines would be unenforceable, they were not implemented.
To address concerns that construction vehicles and equipment may create hazards on trails the following guideline was implemented:

The proposed language restricting garage use from use for storage or workshops received comments both in favor and opposed. Those in favor want to see greater use of garages in place of street or driveway parking. Those opposed felt the language was overreaching in scope to what the CC&R’s allow. After review, the Board agreed the proposed garage revision regarding the use of garages was not applicable to these guidelines that are standards for construction of conversion of garages to approvable JADU’s. The use portion of the language in the proposed draft has been struck.

A number of comments referenced the proposed five-foot setback as being too close to the property line. The guidelines have been revised to reflect; “A detached ADU must be set back a reasonable distance from the side and rear property lines or Easements.” While “reasonable distance” is not specific, it will allow the Architectural Review Committee to review the wide variety of lot configurations and implement wider setbacks as may be deemed reasonable.

The attached guidelines are in effect immediately. We thank all those who submitted comments!!

The Recreation Center will be closing at 9:30 p.m. Monday through Friday consistent with the California Department of Public Health Curfew in order to ensure our guests and staff are able to be out prior to 10:00 p.m.

The Nellie Gail Ranch Emergency Preparedness Committee hosted a meeting via ZOOM to share how to prepare your emergency kit, shut off gas and water, and what to do during an emergency. The training session was hosted on November 10th at 7:30 p.m. by Dr. Kenneth S. Cheng, author of The Pony Express Emergency Preparedness articles.

Access Passcode: BDRjVv2.
(include the period . at end of passcode) 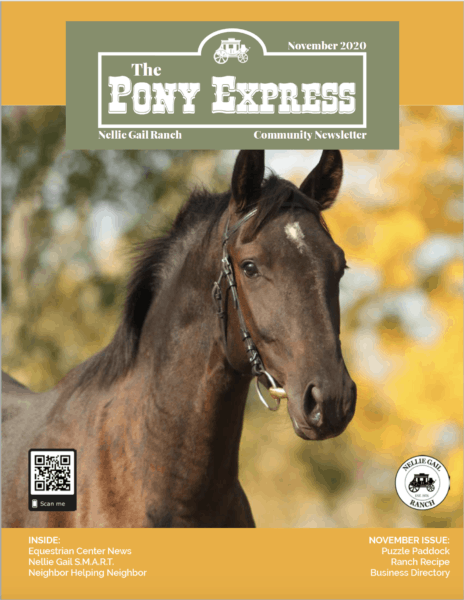 Read the November issue of the Pony Express HERE before it hits your mailbox.

This site uses cookies. By continuing to browse the site, you are agreeing to our use of cookies.

We may request cookies to be set on your device. We use cookies to let us know when you visit our websites, how you interact with us, to enrich your user experience, and to customize your relationship with our website.

Click on the different category headings to find out more. You can also change some of your preferences. Note that blocking some types of cookies may impact your experience on our websites and the services we are able to offer.

These cookies are strictly necessary to provide you with services available through our website and to use some of its features.

Because these cookies are strictly necessary to deliver the website, refuseing them will have impact how our site functions. You always can block or delete cookies by changing your browser settings and force blocking all cookies on this website. But this will always prompt you to accept/refuse cookies when revisiting our site.

We fully respect if you want to refuse cookies but to avoid asking you again and again kindly allow us to store a cookie for that. You are free to opt out any time or opt in for other cookies to get a better experience. If you refuse cookies we will remove all set cookies in our domain.

We provide you with a list of stored cookies on your computer in our domain so you can check what we stored. Due to security reasons we are not able to show or modify cookies from other domains. You can check these in your browser security settings.

We also use different external services like Google Webfonts, Google Maps, and external Video providers. Since these providers may collect personal data like your IP address we allow you to block them here. Please be aware that this might heavily reduce the functionality and appearance of our site. Changes will take effect once you reload the page.